As published in the NOV/DEC issue of Zigzag Magazine 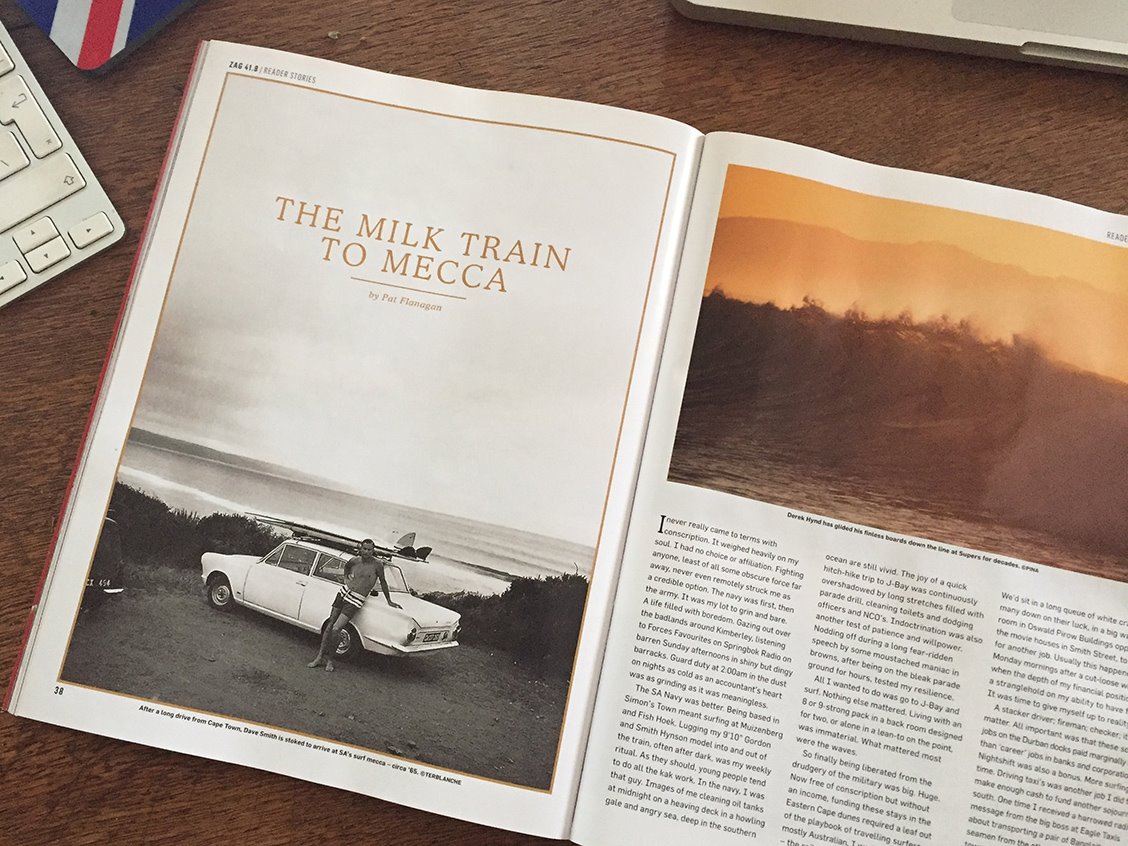 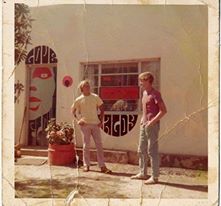 I never really came to terms with conscription. It weighed heavily on my soul. I had no choice or affiliation.

Fighting anyone, least of all some obscure force far away, never even remotely struck me as a credible option. The navy was first, then the army (commandos – the equivalent of the home guard). Its was my lot to grin and bare. A life filled with boredom. Gazing out over the badlands around Kimberley, listening to Forces Favourites on Springbok Radio on a barren Sunday afternoons in shinny but dingy barracks.

Guard duty at 2am in the dust on nights as cold as an accountant’s heart was as grinding as it was meaningless. The SA Navy was better. Being based in Simonstown, meant surfing at Muizenberg and Fish Hoek. Lugging my 9’10” Gordon and Smith Hynson model into and out of the train, often after dark, was my weekly ritual. As they should, young people tend to do all the kak work. In the navy, I was that guy. Images of me cleaning oil tanks at midnight on a heaving deck in a howling gale and angry sea, deep in the southern ocean are still vivid . The joy of a quick hitch-hike trip to J-Bay was continuously overshadowed by long stretches filled with parade drill, cleaning toilets and dodging officers and NCO’s. Indoctrination was also another test of patience and willpower. Nodding off during a long fear-ridden speech by some mustached maniac in browns, after being on the bleak parade ground for hours, tested my resilience and eyelid control.

All I wanted to do was go to J-bay and surf. Nothing else mattered. Living with an 8 or 9 strong pack in a back room designed for two, or alone in a lean-to on the point, was immaterial. What mattered most were the waves.

So finally being liberated from the drudgery of the military was big, huge. Now free of conscription but without an income, funding these stays in the Eastern Cape dunes, required a leaf out of the playbook of traveling surfers mostly Australian. I worked for the SAR&H – the railway. Not once but many times. We would sit in a long queue of white crackers, many down on their luck, in a big waiting room in Oswald Pirrow Buildings, opposite the movie houses in Smith Street, to apply for another job. Usually this happened on Monday mornings after a cut-loose weekend, when the depth of my financial position took a stranglehold on my ability to have fun. It was time to give myself up to reality.

A stacker driver, fireman, checker, it didn’t matter. All important was that these scruffy jobs on the Durban docks paid marginally more than ‘career’ jobs in banks and corporations. Nightshift was also a bonus. More surfing time. Driving taxi’s was another job I did to make enough cash to fund another sojourn south. One time I received a harrowed radio message from the big boss at Eagle Taxis about transporting a pair of Bangladeshi seamen from the other side of the Bluff to town. A police spy had turned me in. This was a big problem in a ‘whites only’ taxi. I was suspended. No biggie, I just spent the next few days on the beach.

J-bay in those days was a frontier town. Surfers had yet put up any bricks and mortar. Everyone who came to surf were visitors. Acid casualties were arrested for throwing stones at passing cars. Wild times when boys and even girls lived rough in the dunes. But more ominously, a few dodgy Americans and Australians and even Joburg hippies with names like ‘Sonneblom’ started pitching up. For all kinds of flotsam and jetsam, this was a place to throw out anchor.

Push back from the residents was inevitable. These khaki clad towns folk and farmers never tried to mask their brisling fascist tendencies. Unwelcome ‘hedonistic’ visitors, who arrived on their doorstep (only slightly less abhorrent to them than those black commies) was a bright red rag. Their hero was Minister of Police Andries Treurnicht, a man known for his short fuse when it came to the weed smoking, acid dropping marginals that were presently invading his enclave (read the whole of South Africa but especially J-Bay).

The wringing of a crane’s neck at the Beach Hotel by a crazed Aussie wild man was the final straw. It was war. These were volatile times. The genie was out the bottle. Tempers were frayed. You’d walk into Ungerer’s store on main street and even though he was happy to take your pennies, he watched your every move. He’d make any modern CCTV camera system look inadequate. You were covered. Heaven help anyone caught shoplifting. Ungerer was also the mayor. Things were tight. The boere (police) were worse. Numerous busts were made. Surfers were locked up, beaten and even tortured. The cops were given carte blanche. We lived in times explosively charged with hatred and naked aggression. Rumours  about CIA agents stalking American drug dealers holed up in Jeffery’s, with binoculars from the foliage, were substantiated.

But all this didn’t stop us coming back. The waves held a magnetism that was impossible to resist. We took chances. In 68, I was in a car with three buddies returning home to Durban on a freezing August night. After surfing perfect waves in the morning, we we’re on a mission to make the last shout at a club in Durban. So we stretched the boundaries of reckless driving and inevitably the car hit a cart in the middle of the Transkei road at full taps. Young and stupid. Very. It didn’t work out well. Besides the tragedy that led to a string of court appearances for the driver of our Ford Taunus in Mount Ayliff, the subsequent three hours were a desperate stab to get the hell out of Dodge. Without a windscreen or back window, packed into a sleeping bag with tears streaming from our eyes in the below zero night, the limits of our endurance were scrutinized . A few years later I was lucky enough (sic) to get a ride with seven other passengers (with boards and gear) in a tiny Hillman Imp. We ran out of petrol in Umtata and had to sell an army sleeping bag to cover the R50 petrol tab to get home to Durban.

Often we’d hitch to or from J-bay. Once a friend and I slept under a bridge somewhere west of Grahamstown, eating prickly pears bought from the locals for supper. I remember a dark night on the road when suddenly out of the foliage stepped a young dude with a blanket and a white painted face, the garb of initiates in the Xhosa tradition. These stark images spring easily into my receding memory.

In 1970 three Aussies pitched in the bay. Alf, Syn and Craig each carried only a board and a small bag that contained a few t-shirts and shorts. Wearing slops, straight off a Port Elizabeth bound steamer from Adelaide they quietly slipped into the folklore of J-Bay. It was summer so wetsuits seemed superfluous to immediate needs. Often Alf, a lanky natural footer with a big smiling face would surf in a pair of basic Khaki walk shorts. They were the first guys, I ever saw surf Supers. They charged. The spirit of the intrepid traveling surfing nomad was epitomized by these guys.

The most unusual trip of all was a train trip with a couple of buddies from Durban via Bloemfontein to Port Elizabeth. A milk train that stopped at every station and siding. Working for the railways entitled us to quarter price fares in a second class compartment. Second class was mostly filled with deadbeats and drunks. First and second class were for whites only. The back carriages of the train with wooden seats and dim lights, were for ‘Non-Europeans’ a term that galled those who carried that labeled. Finally we arrived in PE. But, we still needed to cover the last 47 miles to Jeffreys. We took the SAR&H Railway pullman and sat in the back of the bus. The whole journey took more than three days.

Restless souls, filled with new fangled ideas and ideals, deeply influenced by the searing relevance of the pop culture of the day, we had one thing in mind, the waves of J-bay. Riding boards full of holes from the rocks (no leashes then), or paddling out without wetsuits on rainy days, was the norm. A 40 cent bucket of fruit for lunch and a home made bunny using a tin of canned Goldish veg curry kept us fueled. Life was simple.

Looking back I figure, just like countless other kids around the world, we wanted to break out of the shackles of constraining conservatism into which we never quite fitted. We were not at all like our parents, an unfortunate generation who had endured the second world war. They were looking for an orderly predictable life. We had different ideas – to buck a system, that we perceived, was hell bent on control and conformity.

Nowadays everything has changed. Surfing has made the town of Jeffery’s Bay into a thriving, easy going place where people from all over come to ride perfect waves. Those hardcore locals have either been replaced by a new generation of locals whose lives revolve around surfing, or changed their attitudes, moved or passed on. A few decades ago the place became a mecca where the adventurous and even not so adventurous come to pay homage.

From a more personal perspective, eventually we had our shot at respectability, got married, had families but somehow that wanderlust was never flushed out. The yearning for those magical green walls is forever our default setting. 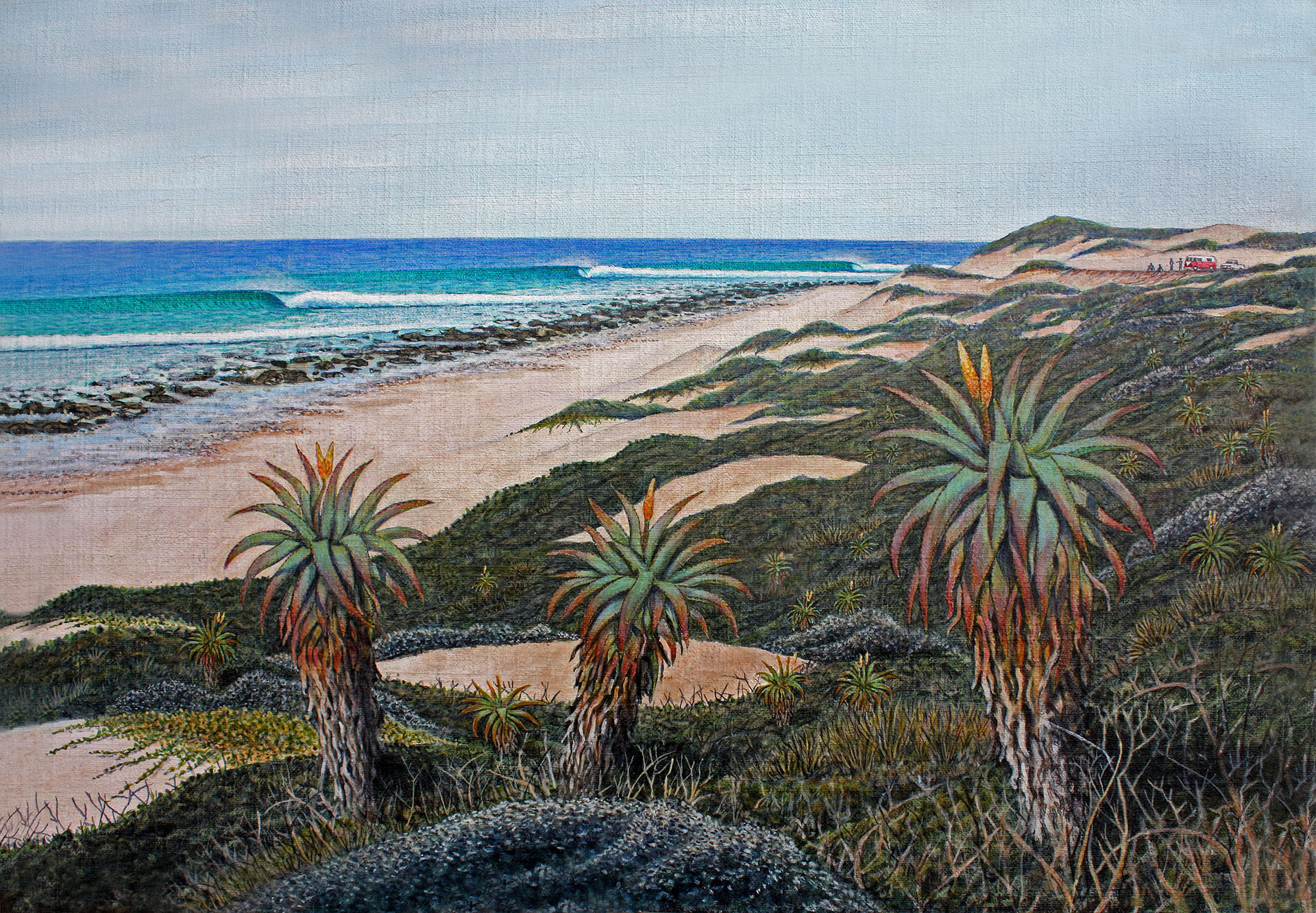 PAINTING OF SUPER TUBES REFLECTS THE TIMES BEFORE HOUSES IS BY DURBAN ARTIST, ROALD ARNDT. For more of Roald’s work go to http://threeoceans.co.za or contact him  at roald@threeoceans.co.za